Gerhard Glatz and Lara Kraegel are technical writers at Dokuschmiede, a service provider for technical communication and information design. In this interview, they tell us about their experiences and give us tips on what to look out for when chatbots are to be used as an output format for technical documentation. 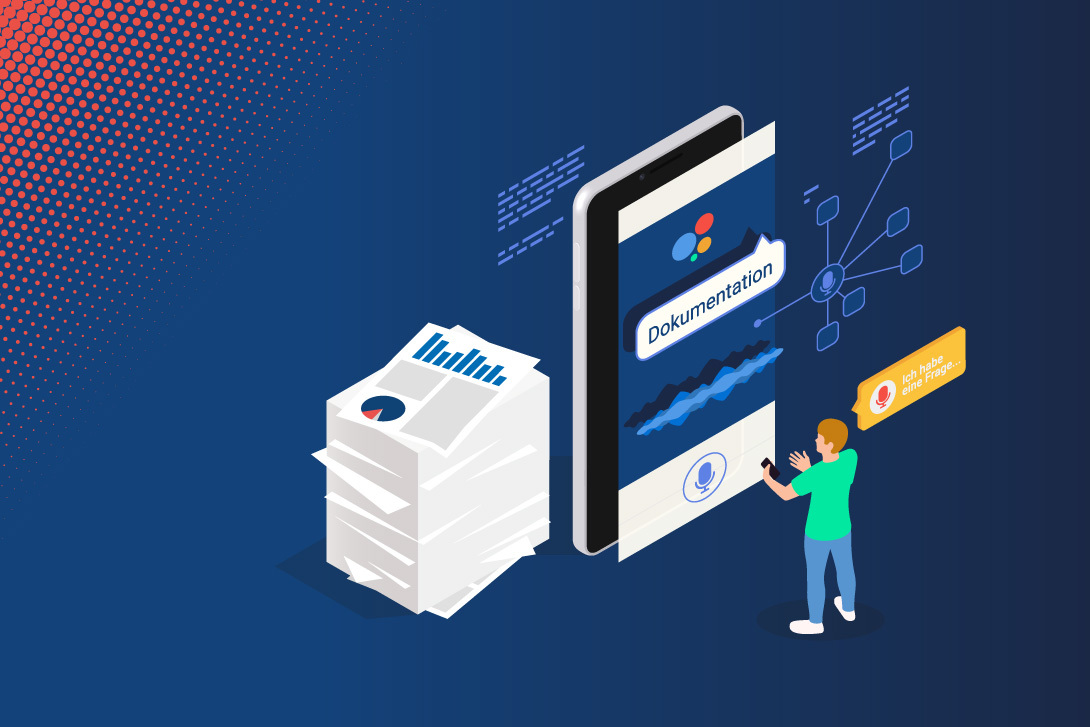 Quanos: Hello, you two. First off, thank you for this interview. You have experience of implementing document content on a chatbot platform. I'm playing devil's advocate here but, is that kind of thing really necessary?

Lara Kraegel: Absolutely. A lot of people have no idea how often we already use chatbots these days. Most people think it's just about simple question and answer bots on websites.

Gerhard Glatz: Exactly! And they forget that Alexa, Siri, and co. are just as much chatbots as the voice-control systems in their cars. Chatbots are integrated into lots of other devices and contexts too. We separate chatbots into textbots that communicate with people via written language and language assistants that can even process and output spoken language.

Quanos: Ok. I'm already getting the sense that chatbots are a lot more widespread than first thought. But in what situation is a chatbot really worthwhile?

Gerhard Glatz: Voice assistance is a particularly useful format when your hands are full. This might be when you're doing maintenance work or using household appliances, such as cooking in the kitchen.

Lara Kraegel: But, regardless of that, a chatbot is of course a great option for anyone who prefers to communicate by speech rather than reading long texts. It also offers a user-friendly alternative for people with a visual impairment or who have difficulty reading.

Quanos: Both of you are really enthusiastic about chatbots. But what was the journey to develop the chatbot like? Did it all run smoothly?

Lara Krägel: Well, developing a chatbot isn't exactly trivial. That being said, it all went to plan actually. It's probably down to the fact that we put a lot of design and planning work into the early stages. This paid off over the course of the project.

Gerhard Glatz: That's right. We laid the major groundwork from the word go and split the project into two processes. Lara took care of the content. People have a habit of forgetting that preparing for the chatbot involves a load of content work.

Lara Kraegel: There was a lot of work to do when it came to choosing the technical system and developing the bot too. Gerhard was responsible for that. We of course worked closely with each other throughout the whole process. But working in parallel at cross-purposes? It just doesn't work here.

Lara Krägel: We started with a target group analysis. This too proved that all the early design work was worth it. After that, we started editing the content. It helped a lot that the document data was already in a CCMS, because not all document content is suitable for chatbots. If the data is already available in topic-oriented form then it's easier to identify. It was also a big help that in the CCMS a lot of metadata was already assigned, which we could then use for the chatbot too. After all, a content element has to know from somewhere what customer request it's meant for. The dialog structure is another important aspect. It's not enough if the bot just reads out a piece of text. In the event of uncertainties, it has to make inquiries, e.g., when there are preconditions for an action, or go through a chain of actions step by step.

Quanos: And what was it like on the technical side?

Gerhard Glatz: The first step was choosing the bot. There are now a lot of systems that range in complexity from simple FAQ systems and script bots, right through to real, virtual agents. The more complex the solutions, the more options you have, but the more complex it is too when it comes to programming and editing content for the bot. Ultimately, we decided to opt for a solution with Google Dialogflow and have developed a voice app for the Google Assistant. The advantage of this was that we could use Google's sophisticated speech recognition and output technology.

After that, we developed the bot. Lara's content played a pivotal role here because it helps to give a better idea of how the dialog situation unfold and how the bot will need to behave. We developed an interface that prepares content and partially reformulates it so that content from the CCMS can be reused in the chatbot. We needed a dedicated publication route for this. The document content that serves as answers to user questions in the bot is fed directly into the bot platform. As a result, the data doesn't need to be maintained or managed at multiple points and the single source aspect remains. Then, when we were fairly satisfied, we thoroughly evaluated the whole system and discovered one or two weaknesses too. And finally, the bot had to be published. But now it's here. Anyone who's interested can watch a demo of our new, virtual colleague on our homepage.

Quanos: I'll definitely be taking a look. You've managed to implement a really exciting project here. Last but not least, I'm interested to hear your opinion: Do you think we'll get all our documentation from bots in the future?

Lara Kraegel: All from bots… I wouldn't go that far. Like we've already said, there's some content that isn't as suitable for bots. And then there are people who just prefer to read. Bots definitely won't be able to replace all output formats but I think that in future they will certainly play an important role in the world of documentation since they present a useful, supplementary format in many different contexts.

Gerhard Glatz: Without doubt. There's already a wide range of applications. And people's usage habits are changing. More and more people prefer to communicate through speech and dialog instead of reading long texts all the way through. So, in any case, bots are definitely on the rise.

Quanos: All that's left for me to do is thank you for this exciting discussion. See you soon.

Lara Kraegel& Gerhard Glatz: Thank you for having us. Bye!

Gerhard Glatz and Lara Kraegel from Dokuschmiede went into even more detail in their lecture. Would you like to see it? Then here's the video. Have fun!